Addressing the illegal trade in the critically endangered Ustyurt saiga 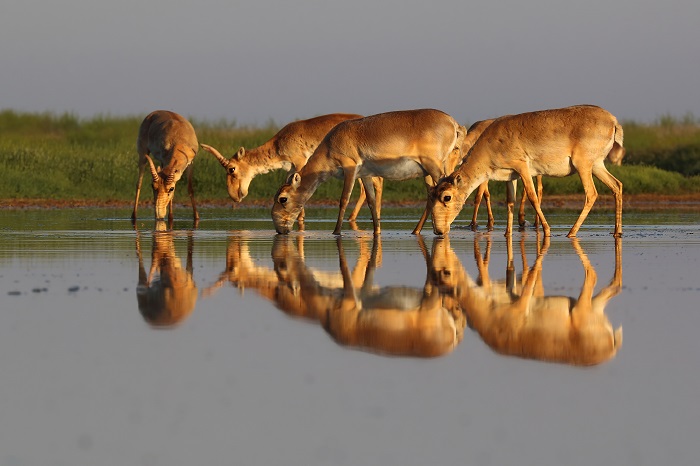 The drastic decline of the global saiga antelope (Saiga tatarica) population since the mid 1990s was a result predominantly of poaching and the illegal trade in saiga horns and meat.

The horns, which are only borne by the males, are the most lucrative target for poachers and are traded to East and South-east Asia, particularly China, where they are used in traditional medicine.

The Ustyurt plateau, straddling Uzbekistan and Kazakhstan, harbours one of the five main populations of saiga antelopes, is the only one with a significant trans-boundary component and the only population currently observed to be suffering an ongoing decline, due to poaching on both sides of the border.

Hence, conservation of this relatively remote and neglected population is of primary importance for saiga conservation range-wide. Best estimates suggest that the Ustyurt supported 17,800 saigas in 2006 declining to 10,000 individuals in 2008, and to 6100 in 2011.

While poaching for both meat and horn is widely recognised as being the main threat to the population, this is compounded by poor enforcement of laws designed to protect saigas resulting largely from limited capacity amongst, and insufficient cooperation between relevant institutions within these range states.

Little is known about the trade routes for saiga products, particularly at the supply end. In order to better understand the rapid decline in the Ustyurt saiga population, this research aims to identify trade routes and the distribution of the benefits of trade (consumption of saiga meat and income from the sale of both meat and horn) alongside the multiple market mechanisms that support and maintain the use of these products, as well as increasing understanding of livelihood activities of local communities, including saiga poaching and trade. By understanding these drivers, it is hoped that capacity and cooperation amongst institutions responsible for saiga protection at local, regional and national levels can be improved, and that this will have benefits for species conservation region-wide. More generally, increased understanding of how background socio-economic factors might impact behavioural norms could then aid the formulation of long-term management strategies for conservation-compatible sustainable development projects for the Ustyurt plateau as a whole.