Wildlife conservation has always been my interest and has turned into passion since I completed my bachelor degree in Biology at University of Indonesia (UI), majoring Ecology. My previous research was focused on bird responses to encroachment effects (edge effects) along Bukit Barisan Selatan National Park, Lampung, Southern Sumatra, funded by Rufford Small Grants and Research Center for Climate Change UI (RCCC-UI). Currently, I am working at Wildlife Conservation Society Indonesia Program (WCS IP), one of the leading non-governmental organization, focused on conservation of wildlife and wild places in Indonesia. I joined WCS as Junior Researcher in Wildlife Policy Programme, early 2016. Since 2015, we have been working to support the Government of Indonesia to strengthen natural resources conservation policies, including revision of regulation and also improve the protected species list, by providing evidence-based researches. I am responsible in conducting research activities, supporting project management as well as maintaining communication and a network of partners and stakeholders, particularly in the Ministry of Environmental and Forestry and Indonesian Parliament. I am also involved in implementing one component of Bangun Indonesia Jaga Alam Demi Keberlanjutan (BIJAK) project, funded by USAID. This project focuses on strengthening policies, instruments and systems at a national-level to promote improved conservation area management and combat wildlife trafficking. One of the main activities is focused on reducing domestic demand of wildlife.

I am very grateful for the chance to be a part of the Oxford Martin Programme on the Illegal Wildlife Trade as a Visiting Fellow. Indonesia is one of the most biodiverse countries in the world with tremendous number of wildlife species. Unfortunately, this country has also faced the rapid and massive exploitation of its natural resources in recent decades. One reason is because of the rampant illegal wildlife trade, within and outside Indonesia. These issues have threatened and caused biodiversity loss for both terrestrial and marine species, among them song birds and sharks. Indonesia is known as the 3rd largest exporter of shark globally and also as having the 2nd highest number of globally-threatened bird species in the world. Despite the huge demand for sharks and songbirds, very little is understood about the characteristics of demand and very few effective demand-focused surveys have been conducted in Indonesia that consider behavioral change aspects. This is the foundation for any effort to implement effective behavioral change interventions, therefore, it is necessary to understand the domestic demand for both species groups. Support and experiences from the OMP-IWT team can strongly support WCS BIJAK and help produce a strong collaborative action to comprehensively tackle these issues. During my fellowship, I am keen to learn how to design a comprehensive behavior change survey to understand those domestic demand and market of song bird and shark fin – who buys these species and why, and what levers exist to change behavior. This will lead to the implementation of rigorous behavioral change interventions for domestic demand of wildlife trade in Indonesia, improving the conservation of song bird and sharks in the future. 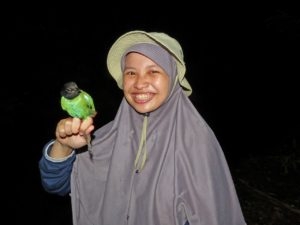