A new programme at the Oxford Martin School brings together academics from conservation science, social policy and cybersecurity to tackle the illegal wildlife trade.

The first research hub of its kind focused on this issue, the Oxford Martin Programme on the Illegal Wildlife Trade will develop new approaches to addressing the trade in illegal products, which is fuelled by rising wealth and social change and facilitated by the growth of the internet. Focusing on consumer behaviour and motivations, the team will collaborate with governments and conservation organisations on the ground to create, test, implement and evaluate the impact of real-world intervention strategies.

Achim Steiner, Director of the Oxford Martin School, said: "I’m delighted to welcome the start of this programme, which tackles one of our greatest conservation challenges. The situation is critical, and the problem is complex in terms of both its ecological and economic impacts. The approach that this team brings is a truly innovative one, and I’m sure that their multi-disciplinary strategy will help to bring the insights and solutions that this issue so urgently needs."

Enabled by a £1 million grant from the School, the programme will tackle a critical threat to biodiversity. The trade in illegal wildlife products is currently estimated to be worth up to $10 billion annually, and continues to grow. Casualties include:

Compounding the issue is its complexity: legality is often ambiguous and regulation efforts are frequently hampered by corruption. And as species become scarcer, their rarity can make them even more attractive, increasing demand even further.

Rapid economic development has led to a rise in disposable income in many Asian countries, increasing the demand for wildlife products. Widespread internet connectivity, the advent of the ‘dark web’, and advances in transportation mean trading can take place quickly and easily, and on a huge scale. In a recent six week investigation of 280 websites in 16 countries, $10 million worth of online trade in CITES-listed species was found by an international NGO.

“It is possible for a pangolin to be hunted in the forest of Gabon one day, and sold in a wildlife market in Guangzhou the next,” said Programme Co-Director Professor E.J. Milner-Gulland. “This interconnectedness facilitates and reinforces the rapid, global exchange of information so that trade in wildlife is now possible on a scale, and at a speed, that is unprecedented. Any exploitable species is now at risk.

“Tackling this issue requires a new research approach that takes stock of the complexity of the problem and the pace of developments, and integrates with the needs of practitioners in the real world.”

Despite recognition of the scale and urgency of the problem, current research on the wildlife trade is sparse and often uncoordinated, and conservation has tended to focus on controlling illegal poaching. Recently, there has been recognition of the importance of understanding demand for wildlife products, but there is still limited evidence on what works to change consumer behaviour. The team will focus on wildlife product sales in Asia, with an emphasis on luxury and medicinal uses, and say the very developments that are driving increased sales – social change and new technology – will also be key to tackling the problem.

Programme Co-Director Joss Wright said: “Many newly wealthy people in these markets are young and spend a lot of time online. They may be more interested in high-end lifestyle brands and celebrity culture than traditional wildlife products, and social media means they will also be more exposed to environmental and ethical campaigning.

“Developments in cyber security also offer hope: traders might be increasingly sophisticated in their use of the web, but there’s also a great deal of scope for new methods of law enforcement.”

Crucial to success, the team say, is providing the evidence and approaches which governments, NGOs and international law enforcement agencies can use to support large-scale action.

“We have a real vacuum here when it comes to data and case studies,” said Programme Co-Director Professor Paul Montgomery. “Interventions in consumer behaviour need to be based on solid evidence, thoroughly tested and then monitored for effectiveness. The danger otherwise is that huge amounts of money and time will be spent, with little impact in return.” 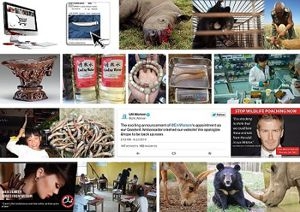