Ploughshare tortoises, Astrochelys yniphora, are protected not only by laws in Madagascar but also internationally as it is listed in appendix 1 of CITES and classified as critically endangered by the IUCN. This land tortoise is endemic to a 160 km² area of Baly Bay National Park and is known as the rarest tortoise on earth. Despite its rarity, wild ploughshare tortoises are victims of human-made fires burning their habitats and also the poaching to supply the international pet trade.

This study was done to see the decline of the wild ploughshare tortoise with the objective of (1) identifying any conservation action to fight against poaching and IWT, and (2) evaluate the impact of undertaken conservation actions.

In order to understand the impact of IWT on the wild populations of ploughshare tortoises, we have conducted population surveys from 2006 until 2015 using the distance sampling method. The first set of survey was done from 2006 until 2008, then another set for 2012 to 2013, and the last set for 2014 and 2015. In the same time, we have recorded all reported seizures inside Madagascar and internationally during the same period in order to see the impact of the international trafficking of ploughshare tortoise on the wild populations.

Permanent markings by shell engraving were done in Madagascar in order to reduce the value of this species, but that did not affect the poaching and trafficking. Some of the seized animals and photos of ploughshare tortoises seen for sales on websites or social media have shown marked animals. This has shown an evidence of ploughshare tortoises taken from wild and released populations to de sold and trafficked.

Conservation actions were held in the ground including permanent patrols, sometimes armed, law enforcement and lobbying in different levels in order to stop poaching from the wild but trafficking still continues as the species is getting rarer which drive its demand higher in the trade. 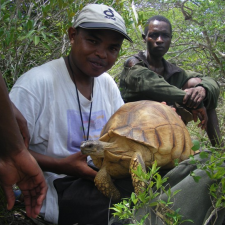 As a Biodiversity Research Fellow, I was very happy to share and discuss my research into the Ploughshare tortoise in Madagascar with all the ICCS members, while learning many new things. Being in Oxford University gave me opportunities to access many resources I wouldn’t have otherwise had access to, like published papers, libraries and courses.

It was a really valuable experience to be able to meet and speak with students, post-docs, lecturers and professors who are leaders in their field, yet so forthcoming in sharing their knowledge with me. They were all so interested in my research and always willing and able to give me great input, that it has really inspired me to do more work in the biodiversity conservation field when I get home!

I also had the opportunity to improve my statistics, data analysis and writing skills while in Oxford; things that you probably have taken courses in before, but it is always good to refresh your knowledge, learn about the latest developments and adapt with evolving technology and science.

I loved being able to attend such a wide variety of seminars and talks, where I learnt about what other researchers are doing and how I can apply their methods to my own work.

To summarise; Biodiversity Conservation is not just about in-situ actions or fieldwork, but about building on your knowledge and experiences, and the Research fellowship with ICCS is one of the best ways I can think of for doing that.