I was a stranger who looked and sounded foreign, yet before even asking who I was or what I wanted, she welcomed me into her home with a smile and hurriedly dragged a chair so that I could sit. When I told her that I was researching jaguars and their interactions with people in the area, her smile faded away. As we began the conversation, I quickly realized that the jaguar, or “treacherous beast”, as she refers to it, is her greatest fear and worst enemy. Every now and then, she is woken up by the loud screams of her pigs as one of them gets snatched by the head and forcefully dragged into the forest by a jaguar. In less than a minute, the jaguar robs her of all the time, effort and resources that went into raising her pigs. Beyond the financial losses, living next to jaguars terrifies her. She has two young children who are not much bigger than a pig and it is only a matter of time until something goes horribly wrong. 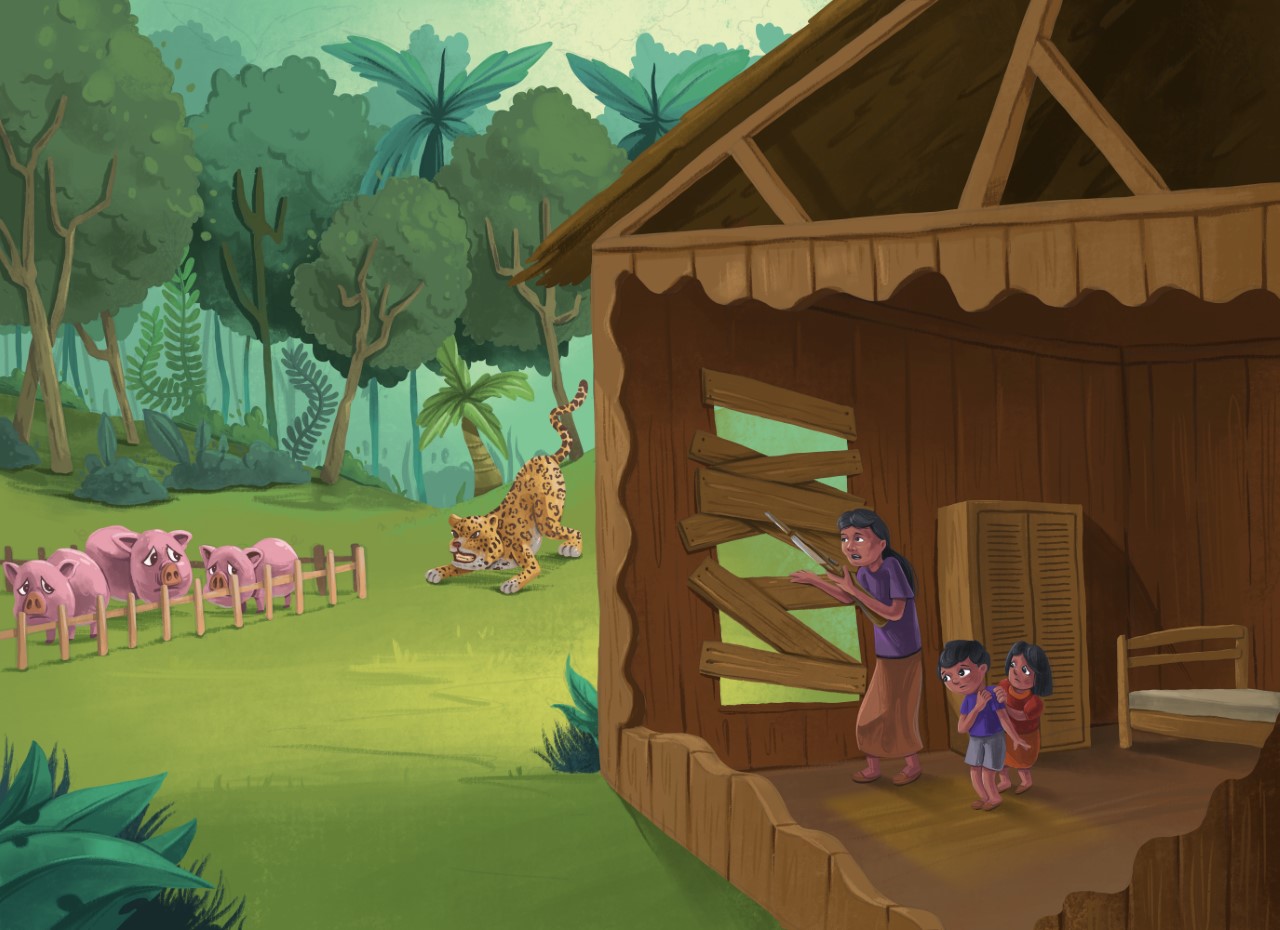 “So what do you do to confront this risk?” I ask. Moving away from the forest edge is not an option for her and corralling her pigs does not stop ‘the beast’ from prowling near. Instead, she has found her own defence mechanism. She takes me towards her backyard where she keeps her pigs, only steps away from her bedroom. The jungle starts a few meters further behind. She points her finger to a hole that she had carved in her wooden bedroom wall, right next to her bed, and explains to me that whenever she hears a noise at night, she sticks out a flashlight and a shotgun through the hole and pulls the trigger. “I have killed 3 of them already”, she proudly tells me, with no reservations, regard, or concern for the fact that killing jaguars is illegal. How could there be? To her, eliminating jaguars is a matter of life or death: “better them than us”.

By then we had established a good rapport, so I went on to ask about my actual research topic, the unpleasant matter of what happens to the jaguars after they are shot. After conducting hundreds of surveys on jaguar trade, I had become a bit desensitized to macabre stories of jaguar killing, but I still felt my stomach turn when she described to me in full detail how she carefully butchered the jaguars she killed. The process starts with a skilful skinning of the jaguar, making sure not to ruin the pelt. A well-treated hide can be hung in a wall for decoration or turned into chairs, hammocks, wallets, purses, belts, hats… you name it. Then, the jaguar’s skinless body must be hung and sliced open to let its fat drip out; “rub the fat against your skin and it will alleviate rheumatism; drink it warm with some lemon drops and it will heal the symptoms of a cold”, she tells me. She does not enjoy eating the meat; it tastes like rotten flesh, but her neighbours will happily eat it. The skull with its four canines are the most valuable part; “to get the fangs out you can bury the skull until it dries out or boil it until the bone softens. Some are also interested in buying the bones, but if not, you can always feed them to the dogs”. Nothing goes to waste; everything has a price and a buyer. Using and selling the jaguars’ body parts does not reduce the fear of the attack that is yet to come, but at least it helps to financially compensate for the losses incurred, and more critically, to establish who is boss - “after all, we are not here to work for that beast”.

I look at her in awe. I am face to face with a jaguar poacher and trader; someone who, as a jaguar conservationist, I have been conditioned to despise and condemn as a criminal. Yet somehow, all I see is a brave young woman who is taking matters into her own hands to protect her family and seizing an opportunity to improve her living conditions. From the stories she tells me, I can tell that she is strong and resolute, she is sharp and ingenious, she is physically tough, she is a provider and she is turning things around for the ones she loves in a place where opportunities almost never come knocking on the door. To my own surprise, I find myself deeply admiring her despite the fact that her latest entrepreneurship happens to be ending with the species that I love.

When I finally said goodbye to her, I felt like something had changed in me. Upon reflecting on my experiences with her and with all the other jaguar ‘poachers’ that I was lucky to meet during my PhD’s fieldwork in Bolivia, I realized that my admiration for jaguars and my work to protect them comes from a position of privilege. I can afford to love jaguars because in the comfort of my urban life, their existence does not threaten my own. I can choose a career in jaguar conservation because I have the rare luxury of being able to follow a dream. Meeting her and getting to know her world from the inside humbled me and made me see that the difference between how we both perceive jaguars is caused by several generations of unequal access to opportunities. If I happened to be in her shoes, I probably would also be a jaguar poacher. This reflection helped me to understand that conserving jaguars and other big cats in human landscapes requires much more than conflict mitigation strategies, livelihood alternatives or environmental education. It requires empathy and justice for men and women like her who have the talents but lack the opportunities. Conservationists will not correct centuries of injustice, but we can make an effort to understand what it really feels like to live next to dangerous predators and to give ‘poachers’ opportunities not just to cope better with wildlife, but to thrive as people. As a starting point, perhaps if we took the time to get to know them rather than immediately criminalizing them, then in time, they too could learn how to love jaguars?

Learn more about my research on the illegal trade in jaguars in Bolivia:

Prevalence and characteristics of illegal jaguar trade in north-western Bolivia