The Hluhluwe-iMfolozi Park elephants: a wild story of their introduction as 4-year-olds, 35 years of family formation and rapid growth, and eventual contraception (with some rhino-killing along the way)

I couldn’t believe my luck: my first job after a conservation MSc involved spending a year tracking 19 radio-collared elephant families in Africa’s oldest game park. What I learnt during that first year and the next 6 months writing it all up, was fascinating. In 1981, after nearly 100 years of absence, the first elephants were reintroduced to the Hluhluwe-iMfolozi region of KwaZulu-Natal, South Africa. Remarkably, all 200 elephants reintroduced over the next 15 years were juveniles (around 2-5 years of age). Last year we published a scientific journal article showing how this unusual founder population has grown and thrived over 35 years, now made up of numerous multi-generation family groups typical of more natural elephant populations. 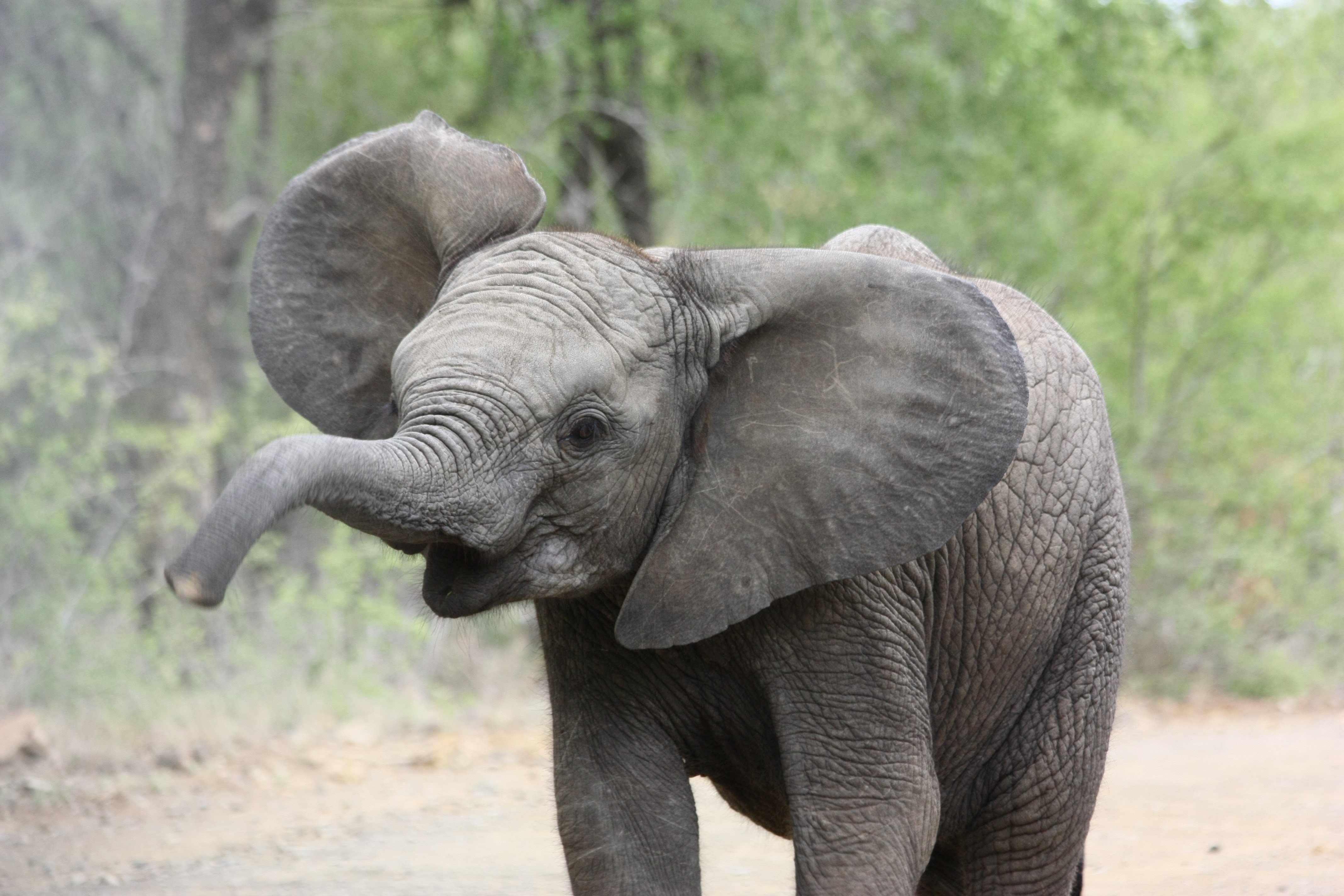 By the end of the 19th century only a handful of elephants remained in South Africa after decades of booming trade in ivory. Around 870 tonnes of ivory left Port Natal (now Durban) between 1845 and 1895 alone, draining the hinterland of pachyderms. Remarkable conservation efforts commenced 100 years later: savannah elephants (mostly juveniles) sourced from a recovering population in Kruger National Park were reintroduced to over 58 protected systems (most <1000km2) across the country. The elephants took very well to their new homes, with their numbers growing at rates far exceeding those of more established elephant populations. Reintroduction success? Yes, and no. The elephant population in Hluhluwe-iMfolozi Park grew from 200 to almost 700 individuals between 1996 and 2016, raising concerns about overpopulation and knock on effects on vegetation and biodiversity. Since 2014, along with other reserves in the region, the park has been implementing a contraception programme to reduce future population growth. A portion of adult females are darted annually with an immuno-contraceptive vaccine, administered by a veterinarian from a helicopter. Elephant overpopulation, and population control, are matters of significant debate and its about more than just science and ecology. 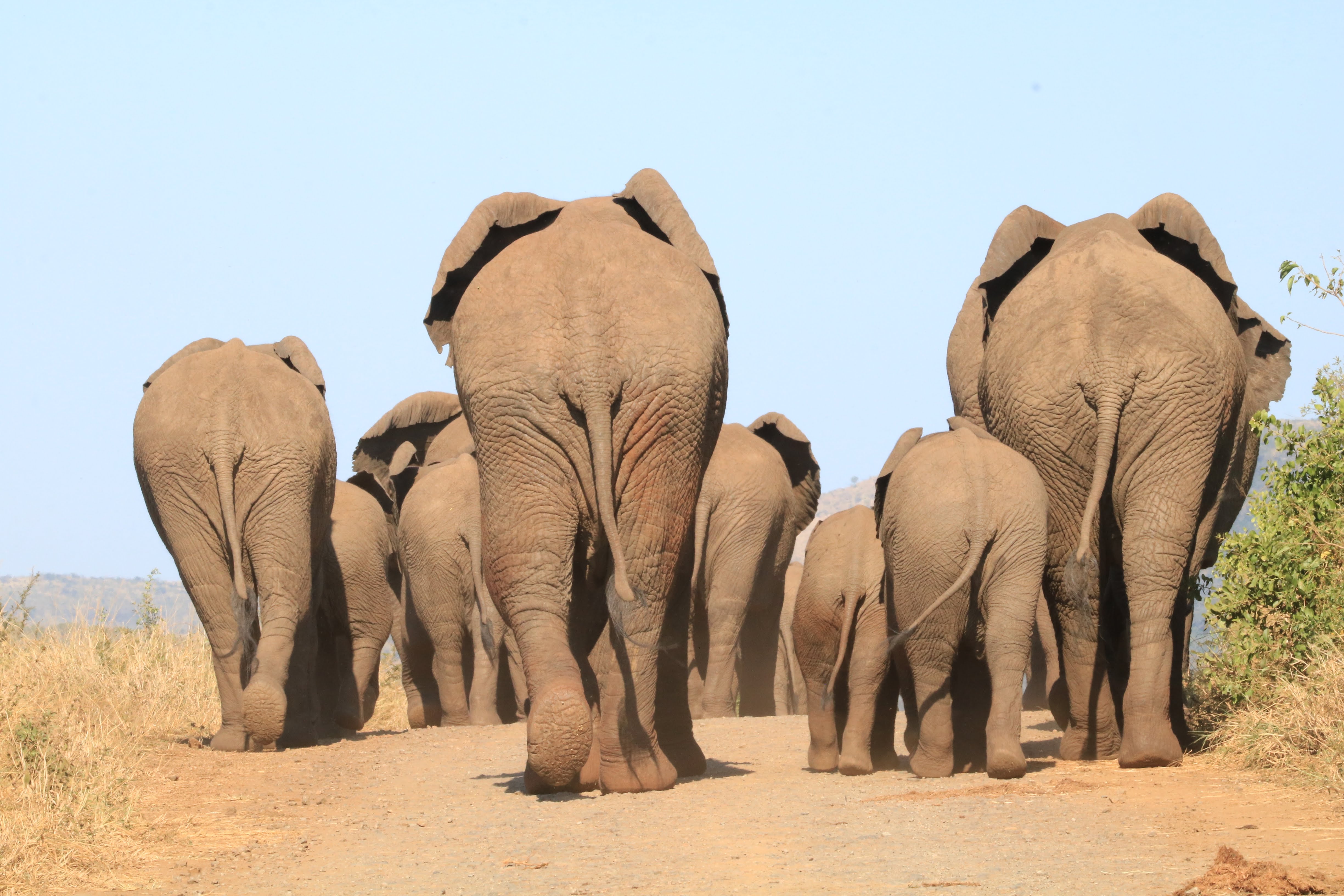 A bum-glomeration: An elephant family group on Hluhluwe-IMfolozi Park heads down to the water. Photo: © Tim Kuiper

Population concerns aside, another interesting part of the Hluhluwe-iMfolozi elephants’ story, as told in this paper, is how they have developed a normal social structure from a highly natural baseline of several unrelated cohorts of juvenile elephants introduced over multiple years into different areas of the park, without adults. The society developed from the bottom up; by 1989 the first cohorts had reached sexual maturity with the first calf born in 1991. Since then, these mother-calf units have gradually developed into small families with 3-6 generations of offspring. Today, these semi-independent families remain highly connected in fascinating ways. The typical family joins up temporarily with several additional families at different times, before splitting up again. Just the kind of fission-fusion sociality typical of more established populations. While not included in the final paper, a social network analysis showed a high level of connectedness among families (see the network diagram below). Many core families are still too young to have become strongly independent.  Preferred associations among families were evident, which may be explained by the oldest females of each associating family being closely related or having been introduced in the same cohort of juveniles. 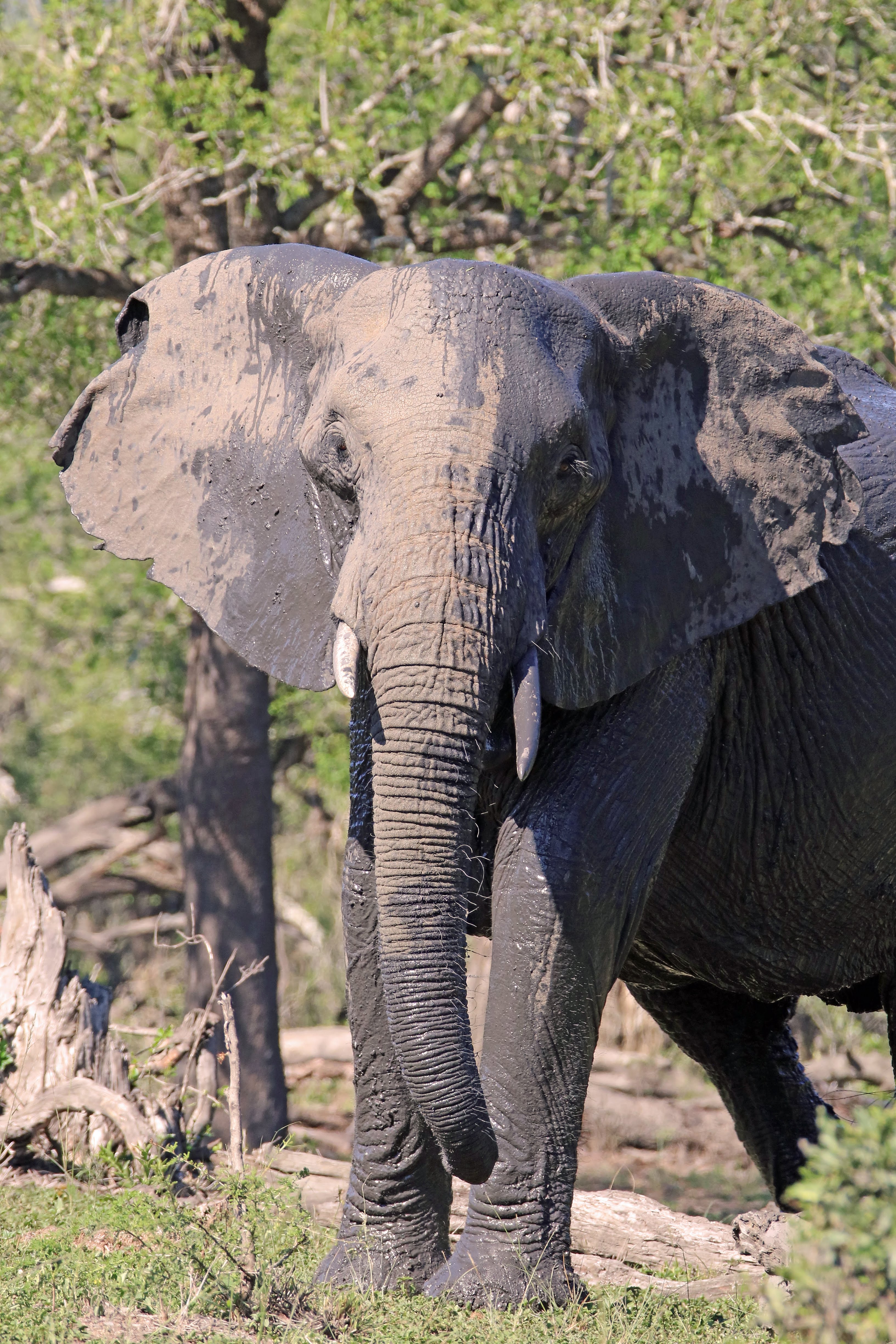 One of the 19 collared females on Hluhluwe-IMfolozi Park. She is the matriarch of her family, the core of which consists of two other adult females and their five offspring of various ages. During the course of 2016 she was observed on 12 separate occasions, with between 8 (her core family) and 91 additional elephants. © Tim Kuiper

No adults were introduced to the park until 2000, when 10 adult bulls from Kruger were introduced to dominate and placate younger bulls who, having entered musth early in the absence of adults, had been killing endangered rhinoceros in their testosterone-pumped state. Rhino-killings stopped quickly and entirely as the older males made swift work of the juvenile delinquency!

This fascinating story speaks volumes about the complexity of this remarkable social species; complex both intrinsically and in terms of how we as humans struggle to manage them. There are still so many questions I don’t have clear answers to – does contraception make sense, pragmatically and ethically? How much elephant impact on vegetation is acceptable? Does relatedness along explain which elephant families prefer to spend time with each other? The baton is left to future researchers to address these important questions and bring us the next instalment in the story of these remarkable elephants of Hluhluwe-iMfolozi.