Four Steps for the Earth: becoming ‘nature-positive’ by 2030

As 2021 begins, we are at a precarious time in both human and natural history. Human-made objects now outweigh all living things on planet earth, and over 8,000 species are threatened with extinction due to human actions(1). This is drastically undermining the capacity of nature to contribute to good quality of life for people(2), as indicated by climate change, land degradation, and even outbreaks of infectious diseases like COVID-19. This decade must be the turning point, where we transform humanity’s relationship with nature, and put the planet on a path to recovery. This is the vision of the UN Convention on Biological Diversity, which is currently developing a post-2020 Global Biodiversity Framework, for the world to ‘live in harmony with nature’ by 2050(3). There has never been a more important time for this bold vision, and everyone has a role to play in its delivery. However, conservation actions to regenerate the natural world are typically disconnected from the human processes that draw down on our planet’s resources. How can we engage the whole world in nature-positive living?

In general, nature is harmed by our consumption, and healed by our stewardship. For example, while average UK consumers do not live in a ‘biodiversity hotspot’, their diet and fashion choices ripple through globalised supply chains, causing impacts in forests and oceans at the source of the raw inputs into their products. Alternatively, indigenous and rural populations in the Brazilian Amazon may rely on hunting and consumption of wildlife for their food security, but also play a role in protecting millions of square km of tropical forest from conversion(4), and can aid the recovery of threatened species(5). On an even larger scale, multi-national corporations, which source vast quantities of raw materials from producers throughout the world, can shape entire ecosystems(6). Yet they also have the power to dictate the standards by which they are produced and used. While these three groups operate in different places and at different scales, they all have one thing in common: the responsibility, and the power, to have a net positive impact on the natural world. But how? 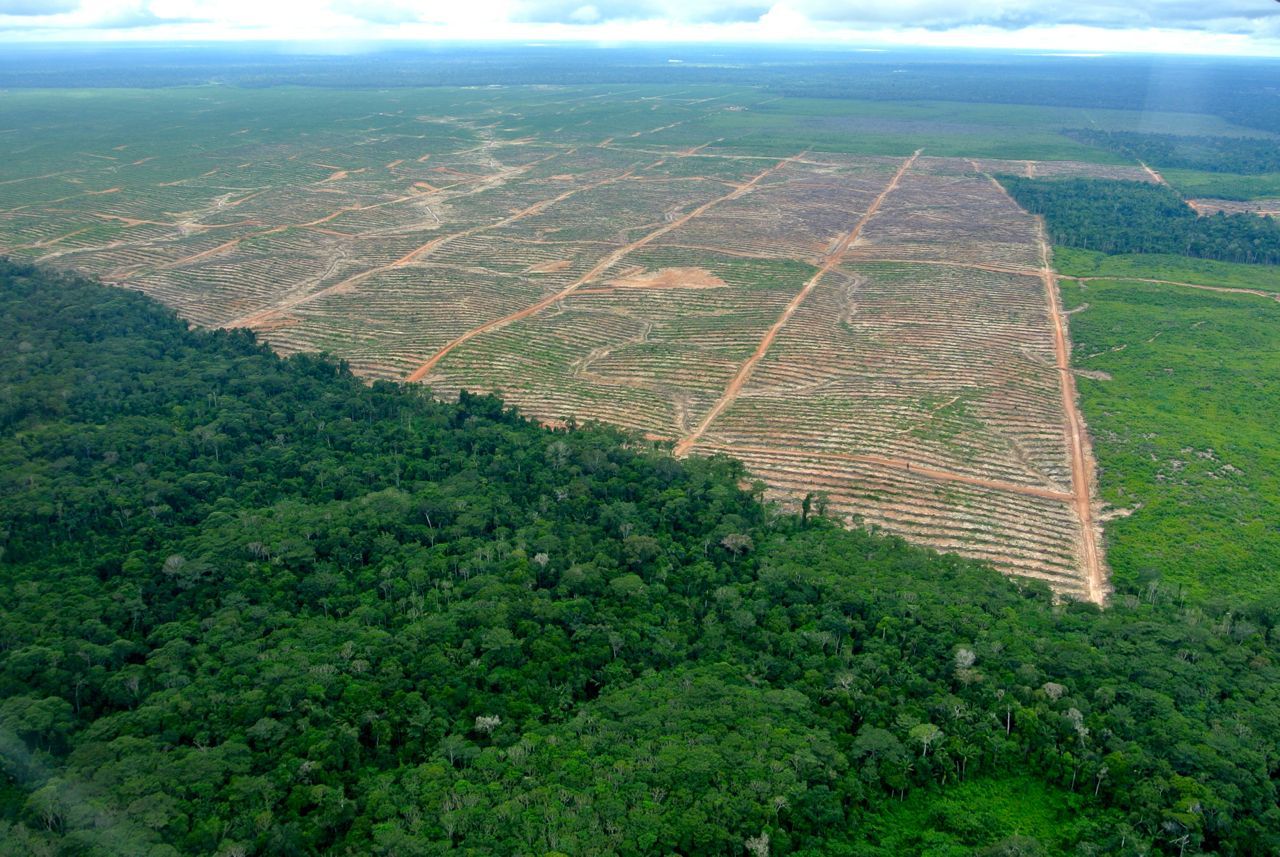 A group of researchers, practitioners and business leaders from 22 global organisations - including ICCS at the University of Oxford, the Wildlife Conservation Society and Balfour Beatty construction company - have published a simple, intuitive framework for uniting diverse human actions towards aspirational goals for nature. The aim is to empower everyone – individuals, organisations and governments – to contribute towards the post-2020 Global Biodiversity Framework, and inclusively build a world in which nature and people can thrive together.

The concept is simple, laid out in a framework called the ‘Mitigation and Conservation Hierarchy’. The idea is that for every person and organisation, their impact on nature is twofold – a negative impact, which is to be minimised using an approach called the mitigation hierarchy; and a positive impact, which is to be maximised via a parallel approach called the conservation hierarchy. These two pathways are both implemented in four simple steps, also known as #4steps4theearth: refrain, reduce, restore, renew. The refrain step involves avoiding any negative impacts on nature as far as possible, the reduce step involves minimising damage to nature where it can’t be completely avoided, the restore step involves remediating any immediate damage to nature, and the renew step involves investing in revitalising nature. 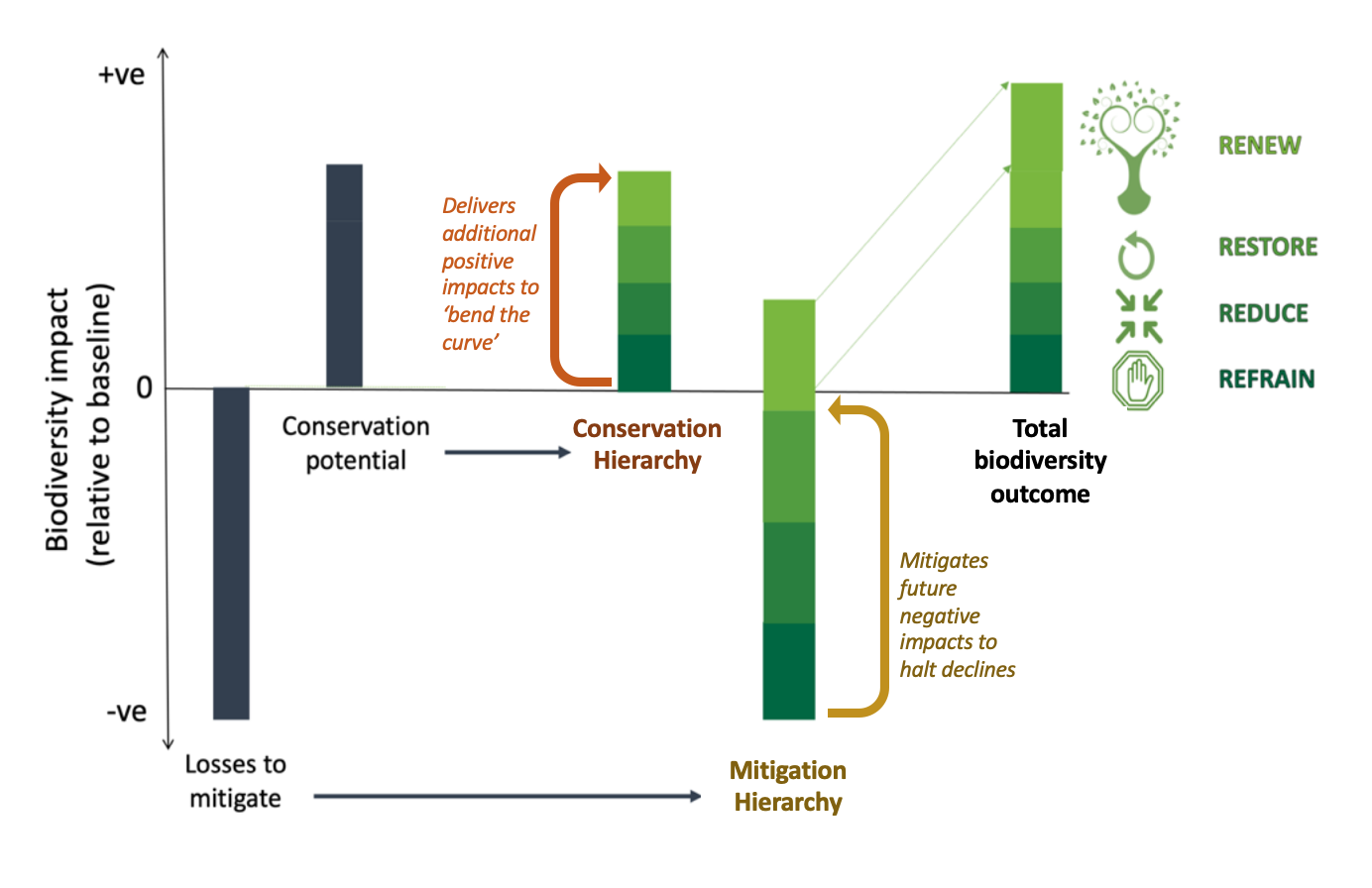 To revisit our examples, an average UK consumer might apply the Mitigation and Conservation Hierarchy to their lifestyle choices, with the aim of making a net positive impact to nature overall. To mitigate the negative impacts of their consumption they could refrain from purchasing the most damaging food and fashion products (e.g. beef has a large land footprint and cotton production is highly water intensive), reduce their remaining meat consumption and clothing purchases, and renew nature through donating to a wildlife charity which operates in ecosystems and species that are affected by relevant supply chains. They might then go above and beyond by re-wildling their garden or greening their city, thus making proactive renew contributions via the conservation hierarchy pathway. A transnational corporation might take similar steps albeit at a larger scale, by refraining from purchasing commodities associated with deforestation, reducing the impact of their suppliers by only buying certified sustainable raw materials, restoring nature in degraded ecosystems that are no longer operational, and renewing nature through biodiversity offsets aiming to compensate for all the unavoidable damage in their supply chain. Via the conservation hierarchy, they might champion better sustainability standards for the industry as a whole (reduce), and invest profits in other conservation initiatives outside the sphere of influence of their supply chain (renew). Finally, the Mitigation and Conservation Hierarchy provides a means to formally recognise the contributions of indigenous peoples to global conservation targets, as well as the contributions of other non-state actors such as businesses and the general public.

What makes the Mitigation and Conservation Hierarchy unique is that it enables all types of negative and positive impacts on nature to be accounted for within the same framework, and it is focused on identifying actions which measurably contribute towards an aspirational goal.

With this united framework for action, coupled with advances in conservation methods and monitoring, we have the tools we need to bring about transformational change for nature in the next decade. What remains uncertain, however, is securing the political will. This must be the decade that we bend the curve on biodiversity loss, and everyone can be part of the problem or part of the solution.

How will you become nature-positive in the next decade? 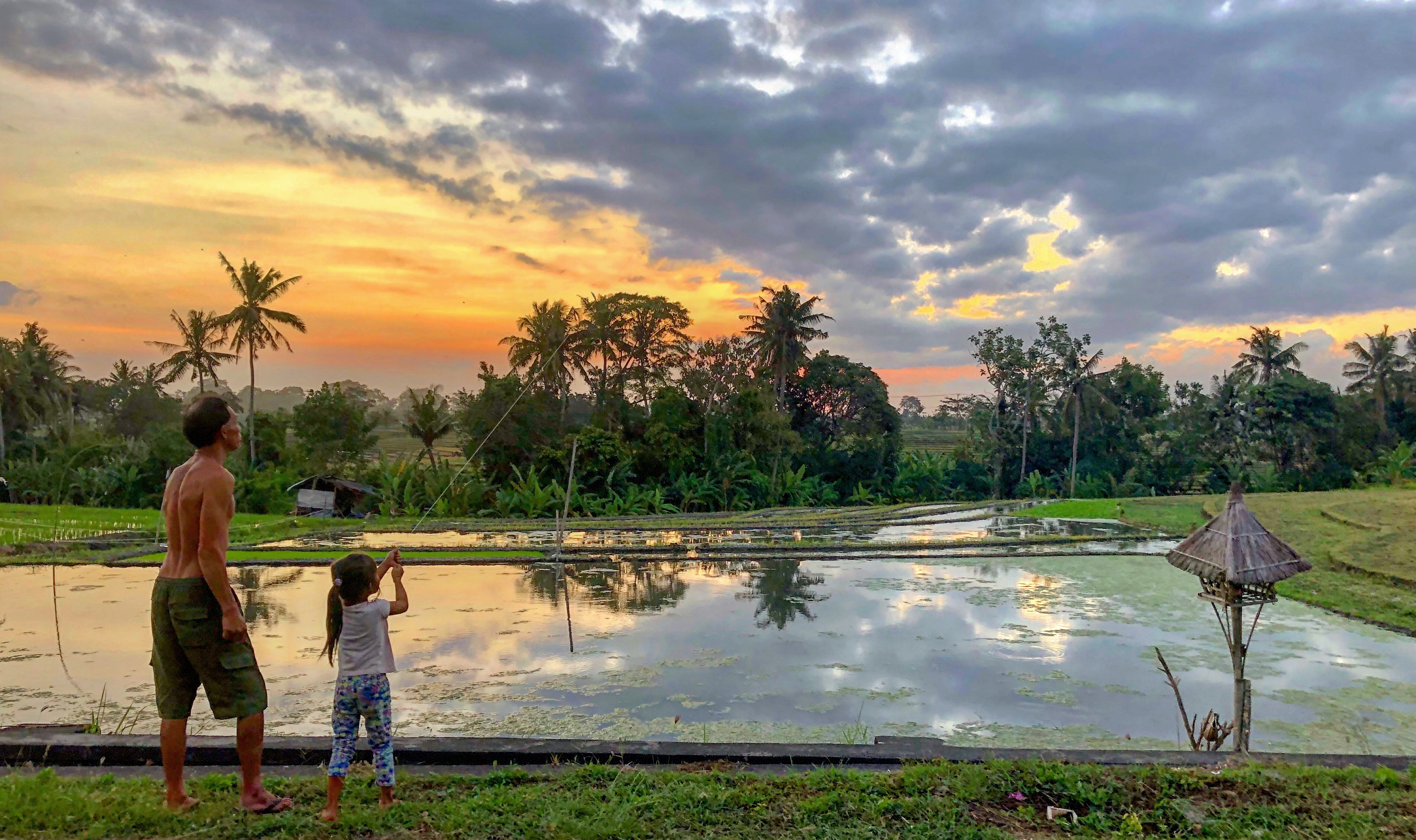 Hollie is a DPhil researcher at ICCS, focusing on inter-disciplinary approaches to shark conservation. She is also a technical coordinator for the Mitigation & Conservation Hierarchy initiative. You can read more about here research here.

Sophus is a PhD researcher at the Durrell Institute for Conservation and Ecology at the University of Kent, researching potential solutions for mitigating the biodiversity impacts of the global infrastructure boom. His research profile can be found here.