Everyone's going Nature Positive - but what does it mean?

I vividly remember sitting in an undergraduate lecture in the mid-1980s, listening to my lecturer passionately explaining that the word "biodiversity" was a meaningless faddish term, which surely would not last. How wrong we can be! Thirty-five years on, I do empathise a bit more with his attitude. New terms seem to be appearing around every corner, as ecologists and conservationists attempt to galvanise the public and decision-makers to understand the importance of nature for our own survival and to care enough to do something about it. "Ecosystem services" never really caught the public imagination, "nature's contributions to people" doesn't seem to be catching on either, "planetary boundaries" has an uphill struggle. Bucking the trend, however, is "Nature Positive".

I really like the term "nature-positive" and use it a lot. It feels like an optimistic, intuitive and clear summary of where society needs to get to. It neatly encapsulates the "global goal for nature" which many of us are hoping will be the core ambition of the Global Biodiversity Framework, to be agreed at the upcoming Convention on Biological Diversity meeting (as represented below in a figure from naturepositive.org). 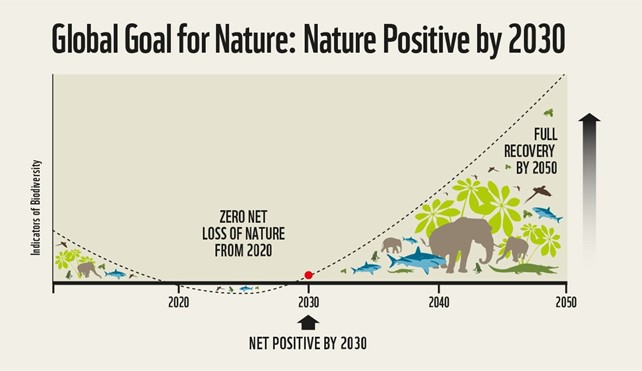 The naturepositive.org site gives a clear definition of what they mean by the term: "We need to halt and reverse nature loss measured from a baseline of 2020, through increasing the health, abundance, diversity and resilience of species, populations and ecosystems so that by 2030 nature is visibly and measurably on the path of recovery." (emphasis added)

Implicit in this definition is the "net" idea; that overall and on balance, there will be more nature after 2030 than there is in 2020. "Net" recognises that human activities will continue to impact negatively on nature, but that this needs to be appropriately compensated for. The definition aligns with the concept of "biodiversity net gain", with the shift from "biodiversity" to "nature" making it more inclusive and the shift from "net gain" to "positive" making it much less technical-sounding. A number of papers have advocated for this type of framing, including our 2019 "net positive outcomes for nature" paper led by Joe Bull, and Martine Maron's "global no net loss of natural ecosystems" paper, also from 2019.

However, once terms start gaining traction, and particularly relatively general, resonant and intuitive terms like "nature positive", there is a huge risk of slippage and loss of meaning. This is already happening for the term "nature positive". Here's a few examples of how it is being defined:

"Nature-positive is the term used to describe a world where nature – species and ecosystems - is being restored and is regenerating rather than declining." Cambridge Institute for Sustainability Leadership

"Nature positive means enhancing the resilience of our planet and societies to halt and reverse nature loss." World Economic Forum

"A nature positive approach puts nature and biodiversity gain at the heart of decision-making and design." Council for Sustainable Business.

The idea of reversing nature loss and moving towards recovery is there on all the websites, and usually 2030 is mentioned, but the concrete specificity of the need for quantitatively demonstrated overall net gain is much less prominent than on the naturepositive.org site. Indeed it is starting to feel like any actions that increase biodiversity anywhere, and by any amount, can be called "nature positive". This has to be resisted.

The importance of this insistence on measurable overall net gain has been brought home strongly to me by the analyses we've been doing of Oxford University's impacts on biodiversity and ways forward for mitigating them. We used the Mitigation and Conservation Hierarchy to help us think through what needed to be done to get to the university's goal; we found it a useful method for supporting planning, action and monitoring of nature-positive targets. The mitigation hierarchy is nothing new, it's been used in a range of fields such as infrastructure and mining for years, but it's not been widely enough applied yet (as Arlidge et al. 2018 discussed). Here's how you could envision it for a global or organisational Nature Positive target, by adding a "Conservation Hierarchy" element (see www.conservationhierarchy.org for concrete examples):

Using this approach, we explored Oxford's options. Our results were sobering. They show how far adrift we as an organisation are from our goal of biodiversity net gain (ie nature positive, in the strict definition) by 2035. As shown in this figure from Bull et al. 2022, we will only make it if we heavily invest in nature restoration in the areas where we are having impacts (which are largely overseas). This is true even if we do things that our staff and students would find very hard to accept, such as no more sales of meat or dairy, no more construction, no more paper use, no more flights, and a zero-waste policy. 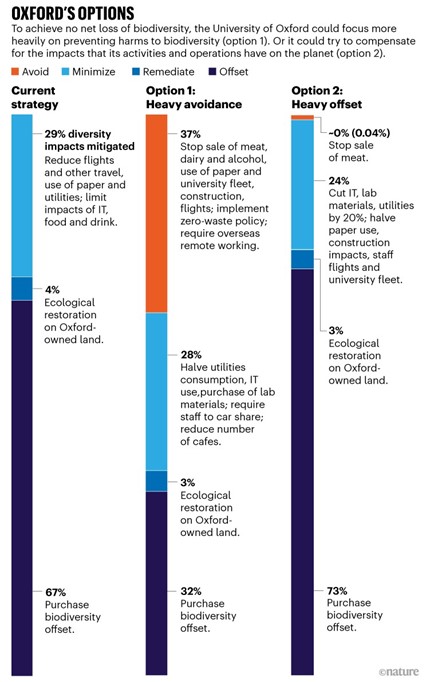 No wonder there is the danger of slippage towards "nature positive" encompassing anything a business, government or household can do to be nice to nature. Although we must welcome all actions to support nature recovery, "better than nothing" partial compensation for our impacts is not good enough, given the parlous state of our biodiversity. It allows us to continue to erode biodiversity while continuing with business as usual. Hence the need to underline the need for:

Without these things I don't believe it is possible to make claims to being on the journey towards nature-positive.

As a scientific community we're still working on methods for measuring the biodiversity baseline - but our Oxford analysis shows at least that it's already possible to have a rough understanding of the impacts we're having on nature - positive and negative. A number of groups are working towards better targets and indicators for nature for different user groups, including the Biodiversity Indicators Partnership, Science-Based Targets Network, Taskforce for Nature-Related Financial Disclosure.

Our latest initiative here at ICCS is co-leading the establishment of a "Nature-Positive Universities" network with UNEP's education team, so that we and other universities around the world can support and learn from each other as we embark on our journey towards being nature-positive. And we do need to see it as a journey - as a planet we are very far from where we need to be, and this scales down to the country, organisational and individual levels too.

But unless we are brutally honest with ourselves about how long and challenging the journey will be - while remaining optimistic that we can get there - we will surely yield to the temptation of making ourselves a wild flower meadow to sit in, thinking we have done our bit for biodiversity. But however many butterflies are flitting about us, this is not nearly enough to compensate for the damage we are doing by the coffee we are sipping, the iphone we're scrolling through, and the pre-packaged sandwich we are eating. Global nature recovery requires us to look these difficult issues in the face, and commit to setting out on our nature-positive journey - in the strict sense of the term.

Thank you to many colleagues for discussions over the years which shaped these views, and to Joe Bull and Henry Grub for very helpful comments on this blog.